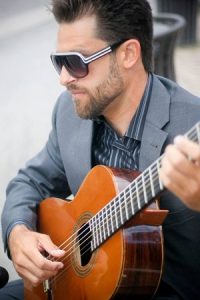 Max Rich has been playing guitar for most of his life. Just like most students, Max started at the age of 12 with guitar lessons at the local music shop. From there he quickly progressed and by 15 was playing nightclubs throughout his hometown of Los Angeles. Influenced by the guitar great Randy Rhoades, he eventually went on to study classical and jazz guitar at California State University, Northridge where he won the Randy Rhoades Fund scholarship. After receiving his Bachelor of Music degree, Max was invited to study at the prestigious Koblenz Guitar Academy in Germany and at the Vienna Conservatory of Music, culminating in a coveted Artist Diploma. While in Vienna, Max was promoted from guitar instructor to Head of the Guitar Department for the American International School, where he oversaw the curriculum, structure and organization of guitar students and faculty. Shortly thereafter, he attended the Cologne Music Conservatory where he furthered his studies in pursuit of a Master’s Degree in Guitar Performance of Jazz and Classical. During his time in Europe, Max worked as a recording guitarist for many of Germany’s well received artists, and film/radio productions. Spanning the genres of classical to rock, pop and jazz, it was in Germany where Max honed his recording techniques. Upon returning to California he continued his everlasting pursuit of musical performance and education. He helped found an online instruction company called Totally Electric Guitars, where thousands of students are able to further their playing via video lessons. Currently, Max runs a music production company that specializes in songwriting and recording for solo artists. He has used his recording abilities to help his students hone their own songwriting and even get their demo songs recorded. Max can be found performing around the Los Angeles area with renowned artists of all genres.

We are honored to have Max as an instructor at Los Angeles Guitar Academy. To request guitar lessons with Max, please fill out our pre-registration form, selecting him as your teacher preference.